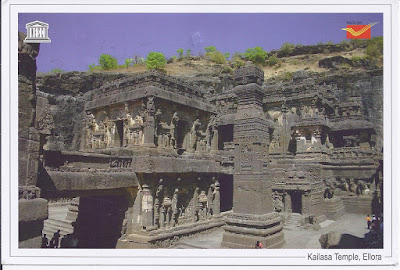 Kailasa Temple is one of 34 cave temples and monasteries known as the Ellora Caves, India. All of them were dug side by side in the wall of a basalt cliff of the Sahjadari hills near Aurangabad, India. The Kailasa Temple, built in 8th century is famous for its vertical excavation. Carvers started at the top of the rock and worked their way downward. 200.000 tons of rock had to be removed and this unbelievable tast was achieved in less than 2 decades. Everything in and around the temple, the pillars even the sculptures was carved from the same rock. Originally it was coated in a thick layer of white plaster so that it looked like covered in snow, thus resembling the sacred mountain Kailash in Nepal, said to be the home of Shiva. The temple was dedicated to this deity.
Ellora Caces were inscribed into the UNESCO World Heritage List in 1983.
Thank you Piyush Bafna for this wonderful postcard !!!
Posted by Sabine at 12:35

Sabine
Hi, my name is Sabine and I am Postcard Maniac :) I love them stamped and written cause having travelled through the mail gives a postcard its own unique character, even if it ends up in my mailbox with a little scratch or a bend here and there. After all, that's what postcards were made for: to travel the world through mail service! If you are interested in a swap, let me know!

I will be sharing here what arrives in my mailbox daily. If you want to take a look at my collection (well a part of it, still uploading daily) please go to my Flickr page, find the link below :)