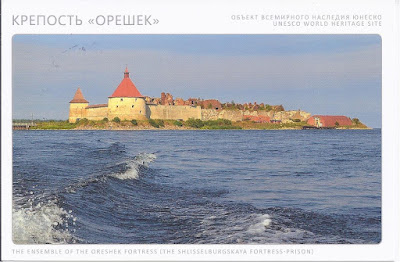 Oreshek Fortress or Shlisselburg is located on an island in Ladoga Lake, not far from St. Petersburg. It was built by Grand Prince Yuri of Moscow on behalf of the Novgorod Republic in 1323 and has served as a Russian forpost in this area for century. The original structure was made from wood and finally changed to stone in 1352. Over the centuries the fortress was often attacked and besieged, demolished, rebuilt and  fortified. For a while it was under Swedish rule and in World War II a contingent of 350 Russian soldiers held the fort against the advancing German troops for 500 days, cutting the last transit route from Leningrad to the mainland. Thus the food and provisions never reached the front and remained under Russian control. The German troops heavily damaged the fortress but were never able to conquer it. Only 6 of the original 10 towers survived the siege, which was finally lifted in January 1943.
Both the island with fortress as well as the town of Shlisselburg are part of the UNESCO site Historic Centre of Saint Petersburg and Related Group of Monuments (1990)
Thank you Natalia for this wonderful postcard !!
Posted by Sabine at 10:12

Sabine
Hi, my name is Sabine and I am Postcard Maniac :) I love them stamped and written cause having travelled through the mail gives a postcard its own unique character, even if it ends up in my mailbox with a little scratch or a bend here and there. After all, that's what postcards were made for: to travel the world through mail service! If you are interested in a swap, let me know!

I will be sharing here what arrives in my mailbox daily. If you want to take a look at my collection (well a part of it, still uploading daily) please go to my Flickr page, find the link below :)